At a client recently, I was tasked with implementing this script. I decided that I would embellish the script and add in support for dynamic package deployment and also allow for cross-forest installation, trusted and non-trusted and workgroup client install.

This is achieved by running a section of the script as a service account which is given the Read-Only Analyst role in ConfigMgr.

To do this run the following command on the site server in PowerShell (as administrator).

Confirm by pressing ‘Y’ then add the relevant AD group and add in execute(invoke) permissions and apply.

The standard method for creating an application or package with ConfigMgr 2012 should be followed but certain caveats exist for them to work as dynamic installs.

For an Application, right click on the application and choose Properties. In the General Information tab select ‘Allow this application to be installed from the Install Application task sequence action without being deployed’

For a Package, right click the Program and choose Properties 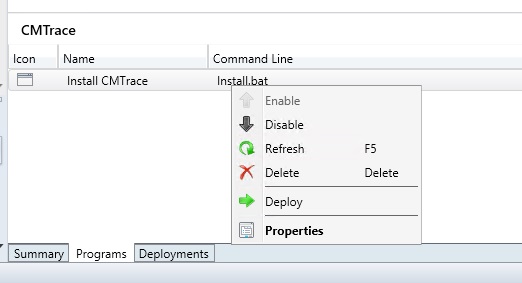 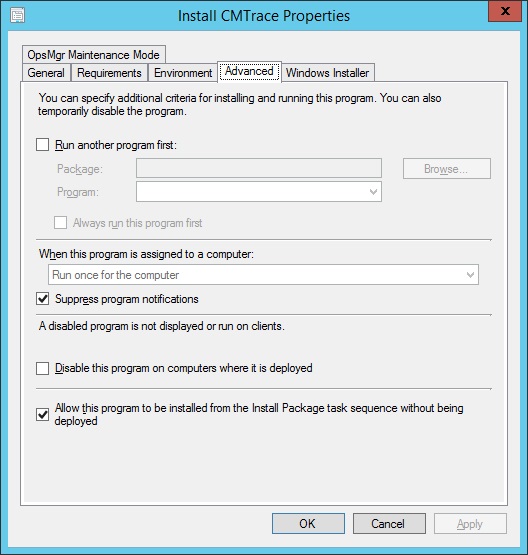 Configure ConfigMgr 2012 to cater for the Dynamic Apps/Packages script

Certain conditions must exist within ConfigMgr for the Dynamic Apps/Packages script to execute successfully. Without these conditions in place the script will not enumerate applications or packages.

Create the Package for the Dynamic Application Script

A package needs to be created within ConfigMgr to hold the dynamic application script. The package should be set with ‘No Program’ associated.

In this instance the package ‘Dynamic Apps & Packages’ has been created to host the file.

The Task Sequence for dynamic application and package deployment consists of three steps:

This step is a ‘Run PowerShell Script’ task.  The Dynamic Apps & Packages package highlighted in the previous section is the referenced package and the script ‘DynamicAppsPackages.ps1’ is added to the ‘Script Name’ box. The execution policy should always be set to ‘Bypass’ unless the script is signed.

Packages that have been enumerated when the script executes will be stored as a list of variables. Starting with APPID001 and incrementing.

The ‘Install software packages according to dynamic variable list’ check box is selected and the ‘Base variable name’ APPid entered. 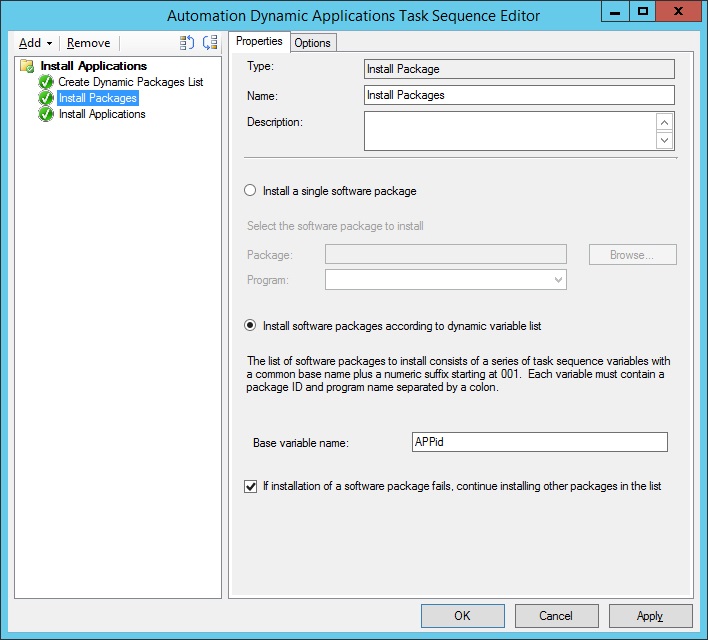 A condition needs to be entered into the task sequence to skip the ‘Install Packages’ step if no packages are deployed to the device being built.

In the Options tab of the ‘Install Packages’ step a condition has been created. The criteria states:

The SkipPackages variable is created by the dynamic app/packages script only if no packages are deployed against the device. Therefore if this were the case the step would be ignored and the Task Sequence would continue.

The ‘Install Applications’ step is identical to the ‘Install Package’ step but with minor differences.

Applications that have been enumerated when the script executes will be stored as a list of variables. Starting with APPID01.  Note a two digit, rather than three, number.

The ‘Install applications according to dynamic variable list’ check box is selected and the ‘Base variable name’ APPid entered. 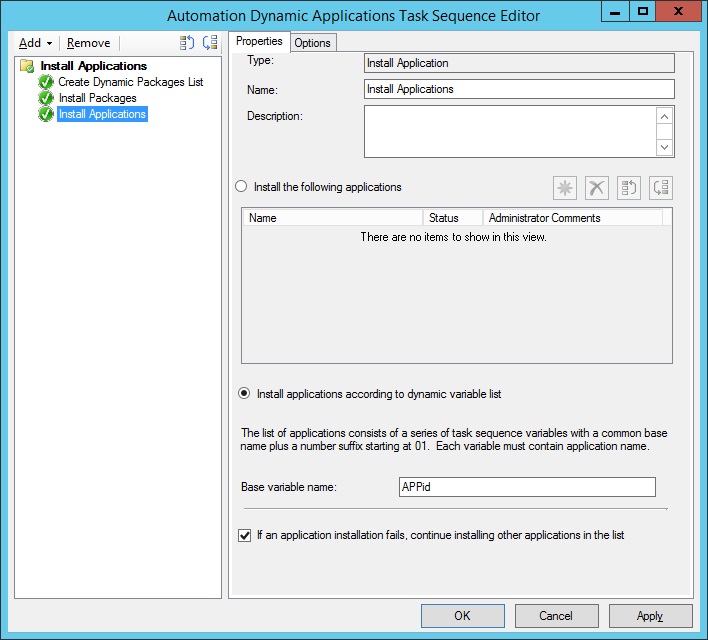 Again a condition needs to be entered into the task sequence to skip the ‘Install Applications’ step if no applications are deployed to the device being built.

In the Options tab of the ‘Install Applications’ step a condition has been created. The criteria states:

As with the ‘SkipPackages’ variable, ‘SkipApplications’ is created by the dynamic app/packages script, only if no packages are deployed against the device, and the step will be ignored.

This section takes the script apart and explains what is happening in each section of the script.

The script can be broken down into three areas:

The example code is run against a test device which has three packages and one application deployed to it.

The following variables are defined in the script

A password, for the service account that will run the remote session, is set as a collection variable on the collection targeted for deployment by the Task Sequence, read from the Task Sequence environment ($tsenv.Value(“svcaccpassword”) ) and stored as the variable $password.

Counters for package and application enumeration are set to 1. They will be used later in the script to create the APPID001/01, APPDID002/02 variables.

The following section of PowerShell code is the ‘meat’ of the piece. It runs in a remote session on the site server and is called from section 3 of the script. It’s the section that will enumerate all the applications and packages deployed to the device.

Note – change the $SiteCode and $SiteServer variables to reflect your ConfigMgr site details.

Other essential variables are defined before running the queries to enumerate applications and packages (e.g. site code – see Variables section for definitions). Note a write-host of $ResourceName. This will write the hostname of the device into ConfigMgr’s smsts.log file (the log file used to check Task Sequence’s). This is a visual check in the log file so we can ensure the code is running against the correct device should any error checking be required.

The code moves into the query phase to collate the app/package information we need to extract.

After running the code on the site server it is determined that the ContainerNodeID for the “Application Deployment” container node is ‘16777253’, in this example.  Note that the ID will never change for this node.

The ContainerNodeID can then be used to link two WMI classes and return the list of collections within the Container Node which the device is a member of. The query above achieves this.

WMI Explorer can effectively show how this query works.

Running a query of SELECT * FROM SMS_FullCollectionMembership where Name = ‘<myhostname>’ retrieves all collection membership for the device.  (Note ResourceID = 16777679)

For the purposes of the application/package enumeration, only the collection membership within the Container Node ‘Application Deployment’ is required, since this the location where all apps & packages are deployed to.

Running a query of SELECT * FROM SMS_ObjectContainerItem where ContainerNodeID = ‘16777253’ returns all the collections that contained within the container node.

Note that the InstanceKey in each result can be matched against the CollectionID from the FullCollectionMembership query and therefore the results can be filtered down to only the collections in the Container Node that the device is a member of. 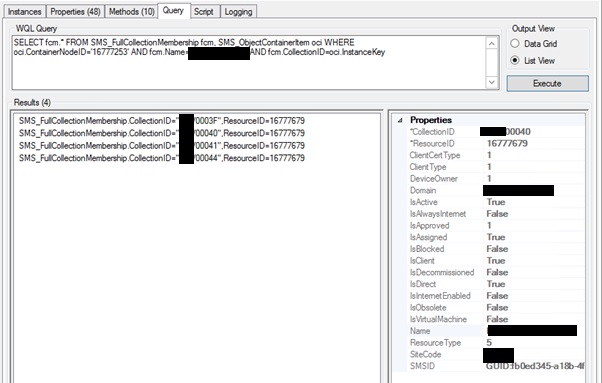 The next step of the code loops for each result collected, e.g. for each Collection ID.

The code checks in the WMI class ‘SMS_ApplicationAssignment’ for each Collection ID, ensures that each targeted collection is a ‘Required’ deployment and stores the application name deployed to the collection in a variable called $ApplicationNames.

For my test device one application has been enumerated – ‘FileZilla_FTP_Client  – Unattended’

A similar loop is applied to packages.

The code checks the WMI class ‘SMS_AdvertisementInfo’ for each CollectionID. Ensures that each targeted deployment is of type ‘Package’ and stores all the advertisements details into the variable $AdvertisementDetails.

Finally the enumerated results of the application and package search need to be stored into separate arrays, $PackageEnumerate, $ApplicationEnumerate, which can be retrieved from the remote session.

The code takes the results from the $AdvertisementDetails and stores the deployments PackageID and ProgramName for each Package separated by a colon. Note this is the format the Task Sequence expects for the dynamic package list.

Note – Look at WMI class that the advertisement details were retrieved from to see what properties are available to use. 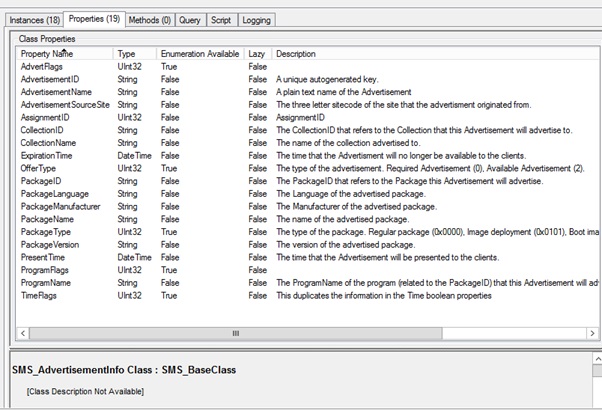 A new PowerShell session is created on the site server, using the credentials supplied in ‘Section 1 – Some local variables defined ’. Note: set the -ComputerName variable to your site server host name

The invoke-Command runs the scriptblock in the session, and passes though the local variable of $ResouceName (or local hostname) to the remote session.

The code brings the arrays $PackageEnumerate and $ApplicationEnumerate back to the local session and they are stored as $localPackages and $localApplications respectively.

So APPID001 could be SITECODE00043:Install SCOM Agent.

A write-host exists so that the data is written to the ConfigMgr smsts.log file as a visual aid to error checking.

$CountPack is incremented by 1 and the loop continues until all variables in $localPackages are written back to the Task Sequence. Note the $TSEnv variable is remmed out in this example as it will only generate errors when run outside of the Task Sequence environment.

The application code works in exactly the same way, except that it only generates a two digit APPID and writes back in the format APPID01 ApplicationName

The final lines of code check to see of the $CountPack and $CountApp variables are still equal to 1. If they are it means that no deployments are assigned.

Remember that the TS has been set to not run the relevant steps if the variables exist.